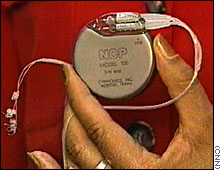 Exciting announcement in treatment for patients with early onset Alzheimer’s disease offers new hope to our senior population. The treatment is similar to deep brain stimulation utilized in successful treatment of Parkinson’s patients which delivers electrical charges to the areas of the brain which controls memory and learning. This procedure is delivered in the same manner to Alzheimer’s patients with the only difference being the area of the brain being treated, which makes the doctors involved cautiously optimistic since many drug trials have had disappointing results.

Researchers surgically implanted a pacemaker-like device into the brain of a patient with early Alzheimer’s disease, they say is first such U.S. operation.

Dr. William S. Anderson, a neurosurgeon at the Johns Hopkins University School of Medicine, performed the surgery and said it was part of a federally funded, multicenter clinical trial marking a new direction in clinical research designed to slow or halt the ravages of the disease.

“Recent failures in Alzheimer’s disease trials using drugs such as those designed to reduce the buildup of beta amyloid plaques in the brain have sharpened the need for alternative strategies,” Dr. Paul B. Rosenberg, also of the medical school and the trial’s Johns Hopkins site director, said in a statement.

“This is a very different approach, whereby we are trying to enhance the function of the brain mechanically. It’s a whole new avenue for potential treatment for a disease becoming all the more common with the aging of the population.”

Though initial findings have been promising, they are still in the clinical trial phase of their research.